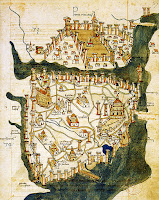 You may recall that several years ago, our blog featured another misspelling of this great city’s name. Carol Reid’s 2008 post discussed the pop song “Istanbul (Not Constantinople),” first recorded by The Four Lads in 1953 and later covered by They Might Be Giants.

But did you know that the city has actually undergone many other name changes over the centuries? It’s been called Lygos, Byzantion/Byzantium, Augusta Antonina, New Rome, Constantinople, Stamboul, and finally, Istanbul. The latter was officially adopted in 1923, after the collapse of the Ottoman Empire, even though the name had been in use for a long time. But according to the folks at National Geographic, “this did not stop foreign travelers, businesses, and even governments from calling the city ‘Constantinople.’ That changed in 1930, once mail addressed to Constantinople—including paychecks, shipping forms, and other legal documents—stopped being delivered to any home or business in Istanbul.”

Today’s typo has also been around for a while. There are 6 instances of Istabul in OhioLINK and 258 in WorldCat. Oh, and if you've never seen what may be the most infamous version of the song, check out this clip of Craig Ferguson and crew lip-syncing, in costume, on the Late Late Show in 2009.