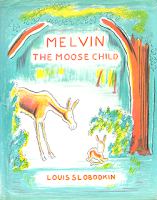 A few weeks ago we had a moose on the loose over in nearby Rensselaer County. This sort of thing can be exciting, and even rather amusing at times, but it's also worrisome because of the dangers posed to the animal, as well as what it indicates about possible food shortages and the problem of population control. The story reminded me a little of the charming children's book Melvin the Moose Child, written by Louis Slobodkin in 1957, in which Melvin is moping over living in the "south woods" where there aren't any other moose children for him to play with. His mother tells him that settling down there had been his father's idea: "He caught too many colds up north and we moved south for his health." Melvin finally persuades his mom to let him wander around awhile, after listening to her admonishments to be careful crossing the streams, and not to go too far north. "Remember," she says, "you are only wearing your summer coat of fur." Suffice it to say that Melvin has some unexpected adventures, but unlike our own recent walk-about (who sadly, after being captured and tranquilized, had to be put down due to leg injuries that likely occurred when he tried to swim the Hudson River), he eventually found his way back home again. We found nine cases of Popluat* (for populat*) in OhioLINK today, and 205 in WorldCat.

(Cover of Melvin the Moose Child, by Louis Slobodkin.)