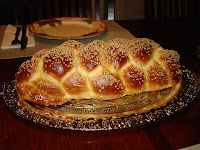 It might be a challenge to correct all of the instances of today's typo in our library catalogs: there were 70 in OhioLINK, and "too many records found for your search" in WorldCat. Harder to find, however, was a warm and comforting image and theme to go with it. I wearied of pictures of space shuttles, warriors, bombardiers, athletes, contestants, and so on, and finally turned to the typo itself for inspiration... Aha! Challah! More of a challenge to make than it is to eat, perhaps, challah is the simple, yet rather fancy, braided bread served on the Sabbath and on Jewish holidays. Sometimes it's topped with sesame seeds, and other times poppy seeds. On Rosh Hashanah, it often includes raisins and is glazed with honey. There are both "water challahs" and "egg challahs," although challah is traditionally pareve (no meat or dairy). Its consumption is considered to be a covenant with God. A double loaf (which is meant to last the Sabbath and well into Saturday) represents the manna that fell from heaven on the wandering Israelites, and is sometimes called "Twelve Tribes" challah. I've heard that it makes the best French toast.
(Six Braided Jewish Challah with sesame, 5 June 2009, from Wikimedia Commons.)