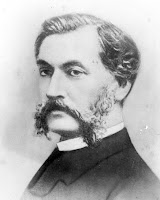 Today marks the date, in 1888, that the "Father of Cinematography" was born. Not the day that he left his mother's womb, mind you, but the day he recorded the world's earliest surviving motion picture on film, called "Roundhay Garden Scene." The man of whom we speak is not Thomas Edison, nor even one of the Lumière brothers, but rather the French inventor Louis Le Prince. Although there had been prior attempts at "motion pictures" (such as the various running, jumping, and flying figures produced by Eadweard Muybridge in the 1870s), Le Prince's startling images were the first to be created with a single-lens camera, on Eastman Kodack paper-based film. Shot in Roundhay, Leeds, West Riding of Yorkshire, the movie depicts his son Adolphe along with some other family members, including Le Prince's mother-in-law, Sarah Whitley. Mrs. Whitley died just ten days after these images were taken, in a somewhat eerie evocation of the idea that a picture "steals" its subject's soul. But it was probably just a coincidence. (Le Prince's own sudden disappearance and demise remains an enduring mystery.) Louis Le Prince also made another short film called "Traffic Crossing Leeds Bridge." We found four instances of Cinemotog* clogging up traffic today in OhioLINK, and 107 in WorldCat.