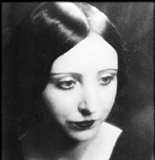 With almost 3,000 Google hits on Anais Ninn, and nearly 1,000 on Anias Nin, today's typo (often mispronounced with a long, stressed i) is a classic misreading at first blush, much like the author herself was at times. A French-born scribbler of high-toned erotica, erudite diarist, and intimate friend of Henry and June Miller, Anaïs Nin was a study in contrasts. Study the way her name is spelled and you'll always know what an A is. In fact, there were only four misspellings of it found in OhioLINK (Anas for Anaïs), probably due to the diacritics, which prompt either close attention to transcription or the shortcut of "copy and paste."