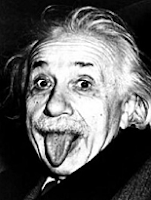 No, that's not a law firm, and I'm no Einstein, but at least I can spell his name right. As no doubt can most people, given that Albert Einstein was one of the most famous men who ever lived. Albert himself, however, was an abysmal speller, possibly due to having dyslexia. OhioLINK contains three instances of Einsten, two of Einstien, and one of Enstein. On November 11, 1930, our boy genius, along with his protégé and pal Leó Szilárd, came out with a cool invention that came to be known as the "Einstein Refrigerator." Which brings us to our second typo of the day: Refridg*. It appears on the Ballard list in the "lowest probability" category, and while that might not sound too bad, it's all relative, since refrigerator is not a word that gets out that much. It's clear, in any case, why it tends to get misspelled: It's a back-formation from "fridge," which is spelled that way because the pronunciation is less ambiguous than were it spelled "frig," and because it's less likely to look like a euphemism for fuck (despite its also-sexual relationship to the word frigidity). As for the Einstein Refrigerator, what's next? The Quantum Vacuum?