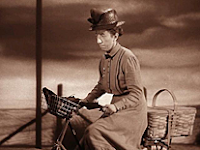 Whether with one c or two, witchcraft contains a lot of contiguous consonants, which might be why it's so easy to fall under a confused spell while spelling it. OhioLINK turns up an unlucky 13 cases of Withcraft, three of Whichcraft, and one of Wichcraft. Much like the guilt of accused witches in Salem, Massachusetts, it's a matter of "high probability." Practice the craft with which you've been entrusted and you should be able to transform these typos to their original state without resorting to magic. Have no fear, though. The Pope himself has recently decreed that witchcraft (at least of the Harry Potter sort) is no longer considered "anti-Christian."