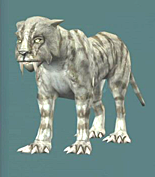 Perhaps the best thing about spell checkers is the way they introduce you to interesting new words (while completely missing the mark in terms of doing their actual job). My own guide to spelling was recently startled by a tagline, urging me to change it to "tiglon." Curious as a cat, I pounced upon a dictionary, whereupon I learned that it's a hybrid, the offspring of a male tiger and a female lion. (Also known as a "tigon" or "tigron.") The converse is called a "liger." (Tiger, see Lion. Lion, see Tiger. Nine months later ... ooh, what a cute little cross-reference!) These are portmanteau words, a coinage from Lewis Carroll's Jabberwocky: "Well, slithy means lithe and slimy ... You see it's like a portmanteau—there are two meanings packed up into one word." Today's typos are also hybrids of a sort. They're what happens when a good word meets a bad writer. Hybird* appears in OhioLINK seven times, Hybid* and Hybrd* one time each. (Tiglon rendering from website To Worlds Unknown.)