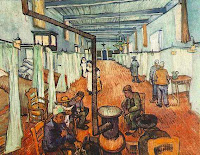 Hospt* (truncated form to be used with wildcard symbol) is a High Probability typo for hospital, hospitalization, etc.

CORRECTION: David Moody commented that the acronym NASA stands for National Aeronautics and Space Administration. A different meaning was given in yesterday's post.
__________
Ward in the hospital in Arles by Van Gogh courtesy of Wikimedia Commons.
Posted by librarytypos at 9:45 AM