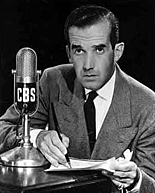 René Descartes famously declared, "I think, therefore I am," a sentiment that can sort of be squashed into a single non-word, our typo of the day: Belive. We believe things, which makes us live or be. Or, rather, 'twould be impossible to be a living human being and not a believing one, or a thinking one. My high school English teacher, Helen Adler, who passed away last year to the great sorrow of a great many people, liked the Blaise Pascal quote, "Man is but a reed, the weakest in nature, but he is a thinking reed," and as a result the school's creative writing and art publication was called The Thinking Reed. Another serious thinker, Edward R. Murrow, developed a five-minute radio program during which both famous and ordinary Americans would read personal essays on the subject "This I Believe." This, I believe, was a fairly bold statement at the height of the McCarthy era when all kinds of Americans were being persecuted for what they believed. Belive* is a "high probability" typo on the Ballard list, occurring on 76 records in OhioLINK. Belieiv* appears in the "lowest probability" section. Specific forms of the typo are found in OhioLINK as follows: Beliver* (eight times), Belives (five), and Belived and Beliving (one time apiece).