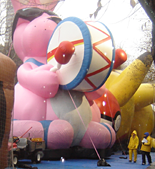 The Eveready Bunny just keeps on going, and I have a feeling that Everbody* (showing up 61 times in OhioLINK) will go on forever as well. So energize yourself and stick a Y in that typo whenever you can. The Energizer Bunny is apparently a "parody" of the Duracell Bunny, which debuted in Europe and has never been seen this side of the pond, due to Eveready's copping the North American trademark rights to "battery bunnies." And just to make today's typo a bit more topical, it seems that George Bush the Elder once compared Bill Clinton to the Energizer Bunny (a term which had come to mean anything that runs endlessly) during a campaign speech he gave in 1992. His boy Dubya has also shown great stamina when it comes to running for office, but even a hopped-up wabbit without an energy policy has gotta give it up sometime.

(In one of the few times that the Energizer Bunny is actually shown standing still, here he is tied down on the streets of New York, prior to the 2006 Macy's Thanksgiving Day Parade, from Wikimedia Commons.)