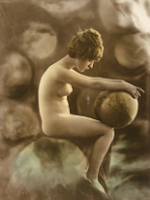 Recently a colleague asked if anyone knew a word that means "feeling the world's pain," adding that her dining companion the night before had issued this request along with "that challenge we in the business have all heard: 'You're a librarian...'" The word she was looking for was Weltschmerz, which literally means "world pain." I had forgotten the word itself, but remembered the irony that infused it during the 2006 National Spelling Bee, where an otherwise excellent Canadian contestant unaccountably blew this one, and in a rather weird way: The only letter she got wrong was the first one, making it a V instead of a W. This was strange because, for one thing, German contains a scant dozen or so words that start with V, and, for another, because her father was a native German speaker. I think more than a few viewers got a whiff of Weltschmerz that evening. Wrold (for world) appears eight times in OhioLINK.

(Female nude with globe by Charles Gilhousen, 1919, from Wikimedia Commons.)