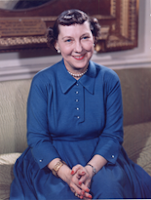 Next to the bird, the stuffing, and the cranberry sauce, pumpkin pie is probably the dish most suggestive of Thanksgiving. OhioLINK contains a single serving of Recipie and 16 more of Recipies (two with"sic"), making it a moderate to high probability typo. (Don't truncate this turkey or else you'll pick up too many hits for words like recipient. Remember, 'tis better to give than to receive.) My great-aunt used to bake pies all year round and, before passing on, passed her pumpkin pie "secret" on to my sister, who recreated it for the family this year. Her recipe was actually Mamie Eisenhower's, whose trick was to bake the empty pie shell in the oven while cooking the filling in a double boiler. At some point, you add gelatin and fold in some egg whites to firm it up, then pour it into the shell and chill. Lots of people liked Ike and I'm sure that Ike liked the First Lady's recipe for White House Pumpkin Chiffon Pie. Thanks, Mamie!