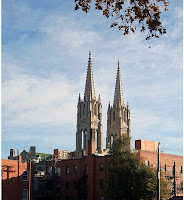 This typo is classified into Section B of the Typographical Errors in Library Databases list of known typos. Section B lists typos with 16-99 occurrences in the typo database of record, OhioLINK. A recent search confirms that there are currently 42 instances of this typo in the database still. Many of the typos in the main list are truncated as a means of grouping different variations of the same word together into a single entry. For example, the truncation symbol, the asterisk, is often used to indicate both the singular and plural forms of a given word. When I search OhioLINK for "Religion*" I get 48 occurrences.

Picture: http://www.flickr.com/photos/denverjeffrey/2992655787/
The spires of the Cathedral Basilica of the Immaculate Conception emerge from behind an old building in Denver, Colorado.

Jeffrey Beall
Posted by librarytypos at 4:00 AM