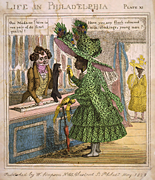 "Shop till you drop" is the rallying cry of many Americans, especially on the day after Thanksgiving, also known as "Black Friday," when retailers hope their customers will put them "in the black." (In fact, the phrase got its start in Philadelphia and was originally a reference to the heavy traffic on that day.) Shoppp* gets three hits in OhioLINK and Shoping and Shoper* get two apiece. Our picture shows a woman from the "black bourgeoisie" inquiring of a shopkeeper: "Have you any flesh-coloured silk stockings, young man?" Wikimedia points out that the "caricature is not really racist in itself—and could even be considered to be subtly anti-racist in pointing out the relative meaning of the term 'flesh-colored'—but much of the humor which white Americans of 1829 would have perceived in it would have arisen from the racist preconceptions which they held." Today is Black Friday at TotDfL. Three typos for the price of one.

("Life in Philadelphia," from Wikimedia Commons.)