Acapella (for a cappella) 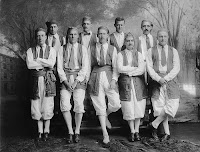 Two weeks ago, I was captured by the reality TV show "The Sing-off." Since I was an a cappella singer in college, and since said college was represented by the 2nd place team, I was very curious to see what would happen. Acapella is actually the first typo listed on the Ballard list as sorted by probability, and according to singers.com, is "among the most butchered and misunderstood musical terms." It is found in the OhioLINK online catalog 142 times, many of which are in titles.

So go sing your way through checking this typo in your own database!

Early image of the Yale Whiffenpoofs from Flikr on Creative Commons license.

Liz Bodian
Chicago Public Library
Posted by librarytypos at 8:23 AM