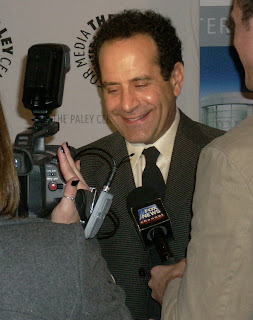 On the TV show Monk, Tony Shalhoub plays an obsessive-compulsive detective (an OCD, if you will), while in this vintage "Alvin and the Chipmunks" clip, Alvin is clearly of a similar bent. Chipmonk* was found four times in OhioLINK, registering as a "low probability" typo on the Ballard list, but one that chips away at our credibility nonetheless. Alvin's father and manager registers in the high range as he tries to get the hula-hoop-seeking critter to quit poking around amid the presents and pay attention: "Al-vin!!" This type of spelling error is a fairly common one, caused by unconsciously substituting a known word for an unknown one ("monk" instead of "munk"). Watch your P's and Q's—or in this case your O's and U's—and perhaps Santa Claus will bring you what you've been wishing for: a catalog with a lot fewer typos in the New Year than there were in the old.

Reminds me of this old joke. A church was holding a fish fry to raise money for their building fund. A fellow in the food line asked the cleric behind the counter, "Are you the fish friar?"