Harvey + Harvy (for Harvey or Harvy) 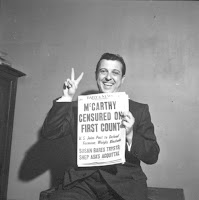 There are plenty of Harveys (some of whom spell it Harvy, though most spell it Harvey), but none so strange and Zelig-like, one might venture to say, as Harvey Matusow, a former member of the Communist Party and basically a hack for HUAC who then tried to take it all back. Matusow, who has been called "the biggest snitch in American history" and "the most hated man in America," had a discomfiting fit of conscience after an innocent labor leader was sent to prison based on his testimony. His public retraction of this lie, among others (he famously testified against Pete Seeger and the Weavers), resulted in a perjury conviction (not for saying that his colleagues were commies, but for saying they weren't), a three-year prison sentence, and ultimately being put on the blacklist himself. The Ohio State Library's online catalog turned up an even dozen hits on Harvey + Harvy, a finding which strongly suggests that each of those records harbors at least one pinko, I mean typo. (Matusow once claimed that there were 126 Communists in the New York Times Sunday Department, even though the total number of employees was only 100.) You should definitely investigate such a work firsthand (especially if the record does not include an authorized heading) to be certain of how to spell the Harvey or Harvy in question. You can never be too careful when it comes to naming names.

(Picture of Harvey Matusow from a photo shoot for a proposed "humorous book on life as a witness.")