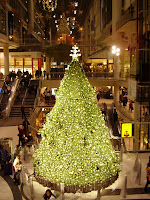 There’s a lot of folklore surrounding the Christmas tree. Many ancient civilizations, including those in Egypt and China, used the fir tree to symbolize eternal life. In medieval Christianity a fir tree hung with apples (a “paradise tree”) was used in pageant plays to symbolize the Garden of Eden.

The decorative tree eventually migrated across Europe, to North America, and even to China and Japan in the 19th century.

Decorations throughout history have included toys and gifts, ribbon, paper, candies and cakes, glass ornaments, electric lights, and more. I’ve even seen Christmas trees at floral shops in Toronto made entirely out of peacock feathers.

(Photo of a crystal-adorned Christmas tree in the Eaton Centre, Toronto, from Wikimedia Commons)