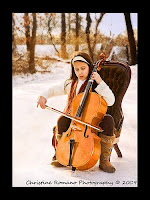 At first upon seeing solists, I thought it was a typo for solstice, but searching it in Worldcat brings up a number of music recordings and it’s clearly an error for soloists instead.

This makes a lot more sense—it’s much easier to miss an o than forget the c and e, and mix up the order of the s, t, and i. Still, I might manage that if my hands were particularly cold, maybe from spending time outside today, during the Winter Solstice?

And here’s a photo of a soloist playing cello in the snow, perhaps during the Solstice? Photograph by Christine Romano, from her Flickr page.

P.S. And in further news, it seems this typo is not that uncommon...we blogged about the singular version two years ago!
Posted by librarytypos at 5:00 AM