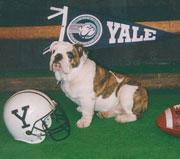 While Cole Porter is best known for his standards such as Begin the Beguine, You do Something to Me, and I’ve Got You Under My Skin, his early songwriting was somewhat...different.

As an undergraduate student at Yale, he wrote fight songs, some still used today, including Bulldog:

(Photo of Handsome Dan, the Yale mascot, from http://www.yalebulldogs.com)
Posted by librarytypos at 5:00 AM