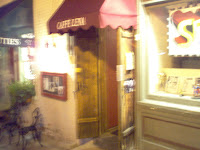 I spent a lovely couple of days last week at the New York Library Association's annual conference in nearby Saratoga Springs. Saratoga is famous for its horses and its race track, its mineral waters and spas, its glorious hotels and battlefields of yore, its potato chips (Saratoga invented the chip, say some, though this claim "may be looked at with appropriate skepticism," according to the book Civil War Recipes and Food History: The Potato During the Civil War), and its world-famous folk music (Caffè Lena is the oldest continuously running coffeehouse in the United States). It has also proven itself to be a favorite conference location for NYLA, which is planning to gather its members there again in both 2011 and 2012. There were 15 examples of today's typo found in OhioLINK this morning. One record contained a [sic] and two others (for a work from 1629) had the antiquated spelling co˜ferences.

(Fuzzy image of the front of Caffè Lena, on Phila Street in Saratoga Springs, 2008, from Wikimedia Commons.)