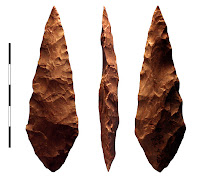 Today we learned that, according to tools found in the Blombos Cave in South Africa, humans were using a sophisticated technique called pressure-flaking to sharpen weapons over 50,000 years earlier than previously thought. A frequent debate in science, which may also have been taking place earlier than we thought, is whether an instinct for violence is innate or learned, otherwise known as the debate between Nature and Nurture. Today's typo seems to be an effort to make these two words more similar, by removing the first r from nurture. I found this error 29 times in OhioLINK, several times in a title field, and 227 times in WorldCat, and is found in the High Probability section of the Ballard list. Don't nurture this error in your own catalog!

Image of the points found at the Blombos Cave, from Wikimedia Commons
Posted by librarytypos at 6:31 AM