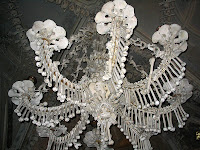 Kostnice Sedlec, or Sedlec Ossuary, is the final resting place of an estimated 40,000 souls. It’s located under the Cemetery Church of All Saints, Kutná Hora, in the Czech Republic (formerly Czechoslovakia), and many people refer to it simply as the “Bone Church.” That’s because in the 1870s, Czech woodcarver František Rint used the skeletal remains of the occupants to redecorate the chapel, lending it an eerie but strangely delicate beauty. Among Rint’s creations are a chandelier containing all the bones of the human body, four “bells” (one for each corner of the chapel), and two monstrances located near the main altar.

Czechoslav* persists on the list of high-probability errors, even though the country of Czechoslovakia officially perished in 1992. In fact, one might say today’s typo is a linguistic memento mori. There are 25 English-language entries for it in the OhioLink database, and 33 occurrences altogether.