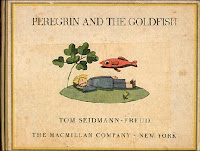 Close, but no cigar, as Sigmund Freud might have said about our typo of the day today. Our Freudian slip, if you will. Actually, the quote that's normally attributed to Freud, though he may in fact not have coined it, is: "Sometimes a cigar is just a cigar." (Groucho Marx similarly might not have invented, but often made use of, the carnival barker phrase: "Close, but no cigar!") In any case, our subject today is not the Father of Psychoanalysis, but rather his niece Martha. I would not insult this charming children's author and artist by claiming that she suffered from "penis envy," but she did seem to think her books would succeed better as the purported work of a man, so at the rather precocious age of 15, she chose "Tom" as her official nom de plume. After attending art school in London, she met and married the writer Jankew Seidmann. Together, they founded the Peregrin-Verlag, a Berlin publishing house specializing in religious material for Eastern-European Jews. Seidmann-Freud created many works for children, including The Magic Boat: A Book to Turn and Move, described on Amazon as "a collection of stories and poems, together with a puzzle and a Punch-and-Judy play, illustrated with movable pictures." Sadly, Martha followed her beloved Jankew even unto death. The Great Depression of 1929 caused them to go bankrupt and both husband and wife committed suicide. We found 13 instances of Frued* in OhioLINK, although one was for the (presumably) correctly spelled Carl Gustave Fruedenberg.

(Peregrin and the Goldfish, by Tom Seidmann-Freud, cover art courtesy of Page Books.)