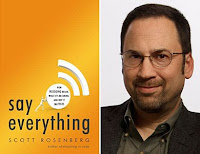 Yesterday was "National Day on Writing," a fact that had escaped my notice until I showed up at a local book talk last night by Scott Rosenberg, co-founder of Salon.com and the author of Dreaming in Code: Two Dozen Programmers, Three Years, 4732 Bugs, and One Quest for Transcendent Software. Scott gave an interesting lecture about the history and significance of blogging, deftly fielding complaints (from audience members and critics in general) that blogging is too ephemeral, too casual, too personal, too anonymous, too impolite, too narcissistic, too shallow, too un-serendipitous, too unpublished. Basically, that it isn't really writing. Scott is living proof, though, that it is. He blogs about writing and writes about blogging. And, while there are fundamental differences between books and blogs (the combination of the two even has its own predictably ungainly wordform now: blook—coming soon to a dictionary near you!), at bottom they both speak to the same human impulse: to express one's thoughts in unspoken words and to do so publicly among a community of readers. There were eight cases of Writng* (for writing*) found in the OhioLINK database, and in 97 in WorldCat.

(Scott Rosenberg and his new book, Say Everything: How Blogging Began, What It's Becoming, and Why It Matters.)

Carol Reid
Posted by librarytypos at 8:42 AM