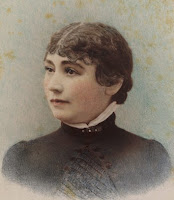 When Sarah Winchester, heiress to the Winchester Rifle fortune, moved from New Haven, Connecticut, to San Jose, California, in 1884, she began building a mansion. It would eventually contain 160 rooms and cost about $5,500,000 over the course of the 38 years it took to complete. That’s not so unusual, perhaps, for someone of her wealth and status.

But the story of the Winchester Mystery House is far from ordinary in every possible way. Sarah, grieving after the loss of her husband and only child some years earlier, had turned to spiritualism for solace. A medium pronounced she was being haunted by the spirits of people her family’s weapons had killed; they had caused the deaths of her loved ones, and she herself was in danger. However, she could she could appease these spirits by moving west and building a great house for them.

That’s exactly what Sarah Winchester did. Construction continued around the clock for the rest of her life, and the results were as odd as their owner—staircases leading nowhere, doors opening onto walls, secret passageways, and the like. Rooms were built, torn down, and rebuilt in an endless cycle. And not surprisingly, the number of reports about cold spots, unexplained noises, and ghostly sightings grew along with the house.

Sarah died in 1922, and ten years later, the Winchester Mystery House opened its doors to the public. It’s still a popular tourist attraction and is listed on the National Register of Historic Places.

Mystrey is a typo of lowest probability, meaning one should expect to find only one such entry in OhioLINK. As of this writing, there were two in that database, but this is balanced out by the fact that Mystrery—in the same category—retrieved nothing.