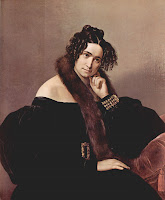 The future of fur is a matter of some debate, given the current awareness of "animal rights" and the often egregious, if rather effective, tactics employed by activist groups such as PETA. But coats, hats, and other accessories made from fur—as well as feathers, wool, and various hides and skins—have been worn for both warmth and cool by all kinds of people in all sorts of places and times. Our grandfathers (or, in some cases, great-grandfathers) didn't really qualify as hep cats unless they were yelling, "23, skidoo!" while wearing raccoon coats. Fur is the title of a 2006 fictional "biography" of photographer Diane Arbus, starring Nicole Kidman. And Venus in Furs, published in 1870, was an erotic masterpiece by Leopold Sacher-Masoch (from whom we get the word masochism). Those are just a few examples of fur as cultural signifier; animals and our wearing of them go back much much further, all the way back to the beginning of man. (See, for example, those cave women in their leopard-spotted bikinis, as optimistically depicted in movies like One Million Years B.C. with Raquel Welch.) Getting back to the future, we uncovered 18 examples of Furtur* (all of them typos, except for one Italian song called Furturella) in the OhioLINK database today.