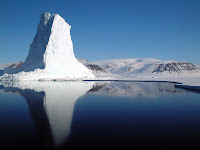 Hamburgers may be getting bigger these days (especially those honking hunks of meat, wrapped in yet more meat, piled atop additional meat, by Burger King and its icky ilk), but lettuce or no lettuce and try as they might, they will never match the sheer enormousness of your average iceberg. (Although, when it comes to enormity, that's kind of a different story.) We uncovered eleven of these typos in OhioLINK, seven of which were for the "Carson-Iceburg Wilderness" in California. (One was the intentional "Joke: Iceburgers & Snowball" from the album A Child's Christmas by Susie Tallman and friends.) Thanks to itinerant typo correctors Jeff Deck and Benjamin Herson, who served up this excellent example from a restaurant menu ("Iceburg Lettuce") in a recent profile by Bill Geist on CBS News Sunday Morning.

(An iceberg at the edge of the Baffin Bay's sea ice is just one of the many sights three airmen from Thule Air Base, Greenland, witnessed recently during a six-day dog-sledding expedition. From Wikimedia Commons.)