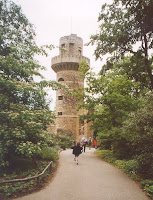 If any girl could ever truly be said to have had golden tresses, it's probably Rapunzel—a likely party girl too, in a way, since she really knew how to let her hair down.* For many years, Rapunzel and her long blonde braids passed the dark dismal days locked up in a tall tower as part of a witch's curse. No trespassing was allowed. But eventually she and an admiring prince conspired to engineer her rescue. She used her plaits as a rope ladder (putting a whole new twist on tossing one's hair to get a guy's attention!) and soon had the man of her dreams climbing in through her window. Actually, this story is quite a bit more complicated than I remember it, what with garden gleaning, pregnancy cravings, skeins of silk, and an indeterminate number of babies and length of hair. It does have a happy ending, though, and so will you, as soon as you clear your catalog of today's typo, which was found trespassing seven times in OhioLINK, and 83 times in WorldCat.

* "Rapunzel, Rapunzel, let down your hair, so that I may climb the golden stair."

(Rapunzel's tower in the "fairy park" of Ludwigsburg, Germany, 2003, from Wikimedia Commons. Click for closeup of braid.)