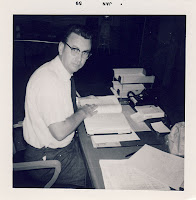 I once wrote a bunch of "library limericks," which started one day when I stumbled across the word poetaster, meaning: "writer of mediocre verse; rhymester; would-be poet." Another definition is: "a writer of insignificant, meretricious, or shoddy poetry." It comes from the Latin for poet + aster, which means "pejorative stuff." Although this first one isn't about a librarian, per se, I think we can all relate...

There once was a poor poetaster
Whose boss acted more like his master,
He said, "You're too slow,
If you don’t want to go,
You will have to write worser and faster."

Regardless of the pace at which you work, the library world would be a much better place if you'd all take a moment to look for and fix today's typos. Workplace is a funny word when you stop to think about it, though. It's like calling your bedroom the "sleepplace" ("sleeplace"?) or kitchen the "eatplace." It may sound like a fairly modern word, but according to Random House, its origins date back to the 1820s. While we found two cases of Workpal* in OhioLINK, Workpace* didn't show up at all. We also got one hit on Workspl* (subject heading: "Diversity in the worksplace"). In Google, "workpace" can be a typo for either workplace or workspace, as well as the actual name of a bit of software (WorkPace, tm). WorldCat returns 27 hits on Workpace, only a handful of which look to be typos for workplace. The rest are for the apparently intended word workpace, which does not seem to have made it into the dictionaries yet. So be a pal and work on this one for me, willya?

"I Believe You Have My Red Swingline Stapler," from the Foundphotos file at Wikimedia Commons.)