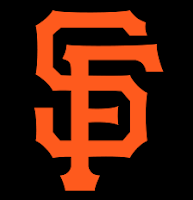 My father is a huge San Francisco Giants fan, so he is ecstatic at the news that they have won the 2010 World Series. The frequent California earthquakes may cause our typo, Francico, where the "s" is thrown into space. This typo is on the D, or low probability section of the Ballard list. A similar typo, Fransisco, is found on Jeffrey Beall's "dirty database" list, which is a way to test your database to see how many common typographical errors exist. There are a number of other variations on this typo as well, including Franciso and Franisco.

Image of San Francisco Giants insignia from Wikimedia Commons.
Posted by librarytypos at 8:26 AM