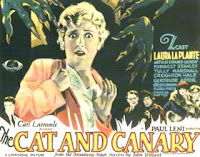 My local public library is airing a series of silent film classics from the 1920s. The films are wonderfully accompanied by a variety of area musicians performing original scores, live and in total darkness! The three movies composing this mini-festival of the modern and the macabre are Metropolis, directed by Fritz Lang, The Cat and the Canary by Paul Leni, and The Cabinet of Dr. Caligari by Robert Wiene, all exemplars of the cinematic movement known as German Expressionism. (Like a demented cataloger or overwrought reference librarian, this screenshot vividly expresses the anguished desire to solve the mystery of Caligari.) There were nine examples of Experss* and six of Expess* skulking about the OhioLINK database this morning.

(Original 1927 quad poster for The Cat and the Canary, from Wikimedia Commons. Speaking of typos, note the missing "the" in the title.)