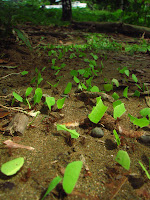 Ants are incredibly industrious creatures and can make quick work of moving large, stationary objects through a sort of united divide-and-conquer strategy. You rarely see them just sitting around like bumps on a log. Although once they've had their way with a luscious green branch, they're likely to leave nothing but chewed up bits of wood in its wake. I love this photo, which looks like something out of a Walt Disney film. The pieces of pretty foliage here look like they're dancing in a sort of procession, with the ants (marvelously constructed to be able to carry many times their own weight) neatly concealed beneath their leafy luggage. Seven instances of Antology are hiding in in plain sight in OhioLINK today (including one marked as [sic] and one as [!]), with another 364 in WorldCat.