Desert* + Dessert* (for Dessert* or Desert*) 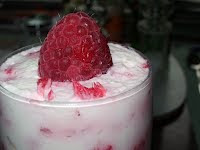 Are you a fool for dessert? Or just a dried-up dieter in a desert of culinary choices? In any event, a fruit fool sounds like the perfect ending to a summer meal (and at least the fruit part's got some vitamins and fiber in it). The original fruit fool was made with gooseberries and debuted in the 15th century. The first recorded recipe for it appears to have come a couple of centuries later. Here is a more recent one for Ginger and Rhubarb Fool, calling for rhubarb, whipped cream, Greek yogurt, and crystallized ginger pieces. I'll have to try this with some rhubarb I just planted in the garden (a "family heirloom" of sorts as it came from an expanding patch of rhubarb that an elderly relative has kept going for several decades or longer now, it seems). All this foolishness allows for nearly endless variations, but the essence of it is this, according to Wikipedia: "A fool (obsolete spelling foole) is an English dessert generally made by mixing puréed fruit, whipped cream, sugar, and possibly a flavouring agent like rose water." There were 27 cases of our combined typo in OhioLINK today (around nine or ten of which were false positives like "Desert Sand Cookies," "Turning the Desert into Dessert," and "Dessicated Desert Desserts") and 341 in WorldCat.