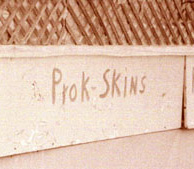 There were only three instances of Prok* + Pork* in OhioLINK today, and only two of them were legitimate typos ("Porkofiev" and "Too much prok for just one fork"). You might want to bear that ratio in mind while searching for this sort of thing locally. Although the relatively small turnout in OCLC (34 hits) meant that I was able to check each one and determine that nearly all of them were typos (mostly of the very same sort and in more or less equal measure: that is, either works concerning the Russian composer or those pertaining to the "other white meat"), save for one clear-cut case of two different people, plus a couple more I really wasn't sure of. Sergei Prokofiev is perhaps best known for having written Peter and the Wolf, a "musical symphony for children," in 1936. And wolves, at least in the world of children's art, are probably best known for liking to eat (the three little) pigs. And if that seems like a bit of a stretch to you, then you try linking the records produced by this combination typo! In any event, it goes to show that it's just as easy to misspell a turn of the century Russian surname as it is to write "Pork" the wrong way on the side of a grocery store in the deep-fried Deep South. Interestingly enough, while there are literally no English words beginning with PROK, this is still an easy typo to make, undoubtedly because so many other English words begin with PRO (about six times as many as those beginning with POR). Be a pro and pore over your own library's catalog for similar examples.

(Click on photo for the larger context. Picture by P. I. King.)