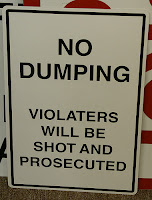 I'm starting to feel a bit violated by the signage in and around my building. The motto of New York State is Excelsior (which means "ever upward"), but thankfully this is metaphorical and doesn't involve taking the "Escaltor." Now I see we've got a new sign outside indicating "permit parking." It goes on to say: "Violator's vehicles towed without warning at owner's expense." Call me a prescriptivist if you will, but I still think apostrophes should be properly deployed. It should either be: Violators' ... owners' or Violator's vehicle [no s] ... owner's. I feel like towing the person who made that sign (and the one who signed off on it) somewhere with no warning and giving them a stern lecture, if not an actual ticket. At least they spelled the word violators correctly, which apparently not everyone does. (And then, of course, there can be problems with logic and chronology, as also demonstrated in the sign to the right. Although this may have been intentional humor.) There were eleven cases of Violater* (for violator*) parked in OhioLINK today, and 54 in WorldCat.