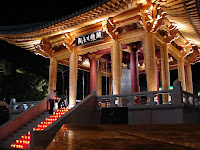 The 2007 South Korean film May 18 (aka Hwaryeohan Hyuga or "Splendid Holiday") tells the tragic and inspiring story of the Gwangju Massacre, in which some estimates say that 1,000-2,000 people were killed in a demonstration against the government on May 18–27, 1980. This typo is considered "low probability" (with two in OhioLINK and 41 in WorldCat) and so are the odds that democracy will come to South Korea's neighbor to the North anytime soon. But, clearly the longing for freedom is as powerful there as it is anyplace else that people live and breathe. While the word democracy need not be spelled right in order to exist, it certainly helps promote access to published works on the subject. Think globally and act locally today to correct this typo in your own corner of the world.