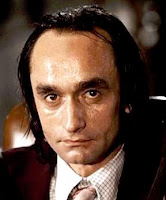 Just saw a great 2013 doc called The Dog about the making of Dog Day Afternoon. Based on a true story, the original film (starring Al Pacino and John Cazale) tells the tale of a bank robbery attempt and hostage-taking in Brooklyn, New York, on August 22, 1972. The following night, I returned to the Madison Theater in order to watch Dog Day Afternoon, not for the first time, but for the first time on the big screen. The differences between the two films were striking, as were the similarities. The original was simply a great movie with amazing performances, but according to the documentary, only "about 30%" of it was true. The Dog is really more the story of John Wojtowicz himself, and one that is far more steeped in the early days of post-Stonewell activism and euphoria than one might otherwise think. It's also interesting to ponder the many ways in which both bank robbery and gay marriage—if you will pardon the awkward linkage there—have changed over the past four decades. Both films are highly recommended, with points for overall excellence, gender politics, and 1970s-style nostalgia. Afternon* (for afternoon*) got three hits in OhioLINK, and 58 in WorldCat. Oddly enough, there were almost the same number for Afternooo*: three in OhioLINK and 59 in WorldCat. Check them out in your own catalogs this afternoon during these lazy, hazy (and really sort of crazy) "dog days of summer."