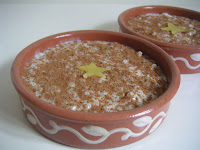 I just found out (on the prom episode of The Real O'Neals) that August 9th was National Rice Pudding Day. Darn! I can't believe I missed that. I love rice pudding. Although it happens that some people definitely don't. As Winnie-the-Pooh's HUNNY-hustling progenitor, A.A. Milne, famously once put it: "What is the matter with Mary Jane? She's perfectly well, and she hasn't a pain. And it's lovely rice pudding for dinner again!— What is the matter with Mary Jane?" Rice pudding can be concocted quite easily in a crockpot with a few basic ingredients. Last night I was perusing a wonderful old letter from my German great-great-grandmother to her daughter, Karolina, who had gone to live in the United States. She's telling Lina about her niece, "Little Lina," and writes: "She is truly a wonder child, at fourteen months of age. She is already able to ask for everything clearly ... Bread, sugar, water, cake, she really knows everything." Those were trying times in Germany, it seems, but it sounds like our precious Kleinkind knew what was gut. Perhaps it was lovely rice pudding for dinner again! Today's typo was found five times in OhioLINK, and 52 times in WorldCat.

(Dessert made with rice, milk, and sugar, flavored with lemon peel and cinnamon, from Wikimedia Commons.)