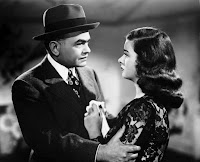 Although it's now considered a classic of film noir, Fritz Lang's 1945 film Scarlet Street was both panned and banned upon its initial release. The critics gave it a decidedly mixed review, while the New York State Censor Board blocked its distribution by way of a statute set up to regulate "obscene, indecent, immoral, inhuman, [or] sacrilegious" films—i.e., ones that would tend to "corrupt morals or incite to crime." (The cities of Milwaukee and Atlanta quickly followed suit, which in the latter case actually led to one, and the ban was ultimately lifted.) Cast against type, Edward G. Robinson plays a good guy in this one, perhaps an overly good one. Chris Cross is a store cashier during the week and a "Sunday painter" whenever he can find time, despite his shrewish wife's utter disdain for his hobby. And it is primarily because he is so good—and so lonely—that he manages to fall in (love) with a bad woman, and her even badder boyfriend. It's a wild ride through the artsy environs of Greenwich Village, and the notorious vicissitudes of fleeting fame. More importantly, though, the film is an unsettling and moving meditation on good and evil, right and wrong, success and failure, guilt and innocence. Today's typo was found 76 times in OhioLINK and 937 times in WorldCat. You can expand your search a bit by trying Robis* + Robin* (which bumps the count up to 102 in OhioLINK, and 1073 in WorldCat), but watch out for those false positives if you do.