Handicaped, Handcap* (for Handicapped or Handicap*) 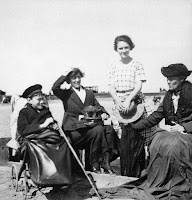 "Grandma, what's a rubber?" asked the small boy, gazing intently at a rerun of Friends. Without missing a beat or batting an eye, the former grade-school teacher answered him. "It's like one of those things that you put on your finger to help you turn the page," she said. (Like a tiny hat for your finger—or cap for your hand—she might have added.) Her young questioner was the sort who loved words and reading, and he appeared satisfied with that ready and pedantic-sounding reply. (Any possible confusion over it, in any case, wouldn't likely become a handicap for at least another decade or so.) The word handicapped used to be quite commonplace, and was even an established LCSH heading until 2003, when it was replaced by "People with disabilities." According to Random House Dictionary: "Although 'handicapped' is widely used in both law and everyday speech to refer to people having physical or mental disabilities, those described by the word tend to prefer the expressions 'disabled' or 'people with disabilities.' ... The often-repeated recommendation to put the person before the disability would favor 'persons with disabilities' over 'disabled persons.'" It lists this meaning of the word last (after its more general or sports-related ones), calling it "sometimes offensive." The word handicap comes from "hand i' cap, or hand in cap, referring to a drawing before a horse race." It's defined as "a race or other contest in which certain disadvantages or advantages of weight, distance, time, etc., are placed upon competitors to equalize their chances of winning." In a way, I find that to be the more salubrious term for "people with disabilities" (doesn't disabled basically mean "unable" or "not able"?), but that's probably fighting a losing battle. (Children's author Louis Slobodkin once signed up for a stint on an Argentine freighter, later describing himself as an "ample-bodied seaman.") Today's typos were found four times (once) in OhioLINK, and 296 (69) times in WorldCat.

(Scenes in the life of a handicapped boy, sitting in a wheelchair on the beach, from Iconographic Collections and Wikimedia Commons.)