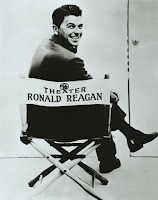 "Gentlemen, please, no fighting in the War Room!" (Slight paraphrase of the iconic line from the 1964 film classic Doctor Strangelove.) Two decades later, on August 11, 1984, Ronald Reagan was about to give one of his weekly addresses on National Public Radio. The subject was the right of religious high school students to meet as a club on school property after hours. He decided to open with a joke: "My fellow Americans, I'm pleased to tell you today that I've signed legislation that will outlaw Russia forever. We begin bombing in five minutes." Of course he was just kidding around with the sound checkers, and his words were not actually broadcast, but merely leaked by the press. Still, the Soviets were a tad miffed. It all blew over eventually, though, and the nuclear arms race resumed its usual pace. While searching for hits on this bilateral typo, I came across a record for a Dutch poster entitled Stop de bommen Reagen. Nuff said there, despite the misspelling of the Gipper's last name. Not to "Russia" or anything, but Reagen* + Reagan* (for Reagan* or Reagen*) turned up three times in OhioLINK, and 48 times in WorldCat. Is this thing on?