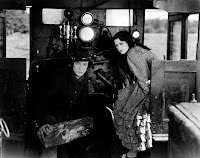 The 1926 silent gem The General was a personal favorite of its co-director and star, Buster Keaton. Despite the fact that it received a lukewarm response from both critics and viewers—and went wildly over budget, sadly forcing Keaton to forefeit artistic control and independence in the film industry—Orson Welles once described it as "the greatest comedy ever made, the greatest Civil War film ever made, and perhaps the greatest film ever made." The General, in which Keaton's character fights valiantly, if a bit absurdly, for the Confederate Army (mostly atop and around moving trains), is based on a true story that occurred in 1862. I got a chance to see this movie in its newly restored format at the newly restored Madison Theater. Perhaps the greatest film ever made, and certainly the best one being shown in Albany, New York, last Sunday afternoon—for 35 cents no less—played to a grateful audience of five. We discovered five cases of today's typo in OhioLINK, and 331 in WorldCat.

(Buster Keaton & Marion Mack in The General, 1926, from Wikimedia Commons.)