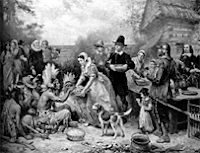 Today we can all give a word of thanks for the fact that there are relatively few typos in OhioLINK for the word Thanksgiving. To be exact, we found eight for Thankgiving, three for Thansgiving, two for Thanksiving, and one for Thnaksgiving. (Regrettably, we had to pass on Tanksgiving and Thinksgiving, potential variants that tickle the funny bone, although for that very reason there seem to be numerous sites on Google employing them each as puns.) As for the three main players at the First Supper, there are seven servings of Indain*, three of Pilgrams, two of Trukey*, and about 35 of Turky (which was apparently an alternate spelling for both Turkey and turkey back in the day).

During this time of reflection on our British forebears, it might also be a good time to point out that you can distinguish, in many cases, between typos and good old-fashioned "spelings" by consulting the Oxford English Dictionary, which is freely accessible online through your local library's subscription and still consuming about as much room in print as the original Thanksgiving dinner did, on shelves in any good, large library. (Pictured here is The First Thanksgiving, by Jean Louis Gerome Ferris, from Wikimedia Commons, available there because its shelf life, unlike that of today's leftovers, has long ago expired.)

I was surprised to see that there was a blog entry on a holiday. But for heaven's sake, can you please pick just one word to blog for typos, especially on a holiday? Some of us have a week to catch up on, and it would sure be appreciated if there were only one word per day to have to catch up.