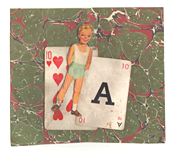 My grandfather, great-uncle, and uncle were all architects and house builders. Consequently, I now occupy a little bungalow built by my mother's father in 1928. Although I often feel a bit cramped within its cozy confines, it's both comforting and confounding to consider that a family of seven lived here in relative harmony for nearly twenty years (the eighth member politely postponing his arrival until his father could erect a slightly larger dwelling in the suburbs). Achitect* appears 19 times in OhioLINK, making it a "high probability" typo on the Ballard list. (Eighty-year-old playing cards and paper doll found behind the baseboards of my living room. Ach! as my German forebears would say.)

P.S. I was mistaken about the Eighth Member, who it turns out was fully four when the family moved. He clearly remembers running around outside, tripping, and spilling his Hopalong Cassidy cookies into the open foundation of the new house.
Posted by librarytypos at 5:00 AM