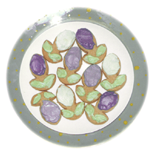 Rocester is spelled correctly (according to the Library of Congress authority file, but not the somewhat error-prone Columbia Gazetteer of the World) for the town in England, in two out of six occurrences in OhioLINK. But the other four are definitely typos for Rochester, New York—which, by the way, has the interesting distinction of being known as both the "Flower City" and the "Flour City"! While seeking out other misspellings for the word Rochester, I was a bit surprised by the two hits I got: references not to a place, but rather to the words orchestra and orchestral. This typo is of a certain kind that we occasionally see in which the first letter of a word is missing. (It also occurs sometimes with the final letter.) This may be due to a filing-indicator problem (if the search is done in browse mode), but is more likely the result of simple haste. Take time to spell and smell the flowers (Rochester's Lilac Festival is May 9-18 this year) and please have a cookie. (I made them myself.)

Errata: I must apologize to the Columbia Gazetteer of the World, which is correct in spelling the Rochester in Kent, England, with an h. There is also a Rocester in Staffordshire, spelled without the h, but it's unlisted. This brings the number of typos found in the gazetteer down to a more forgiveable one: "Southhampton," a town in Long Island, New York, which also has an h, but only one.
Posted by librarytypos at 5:00 AM