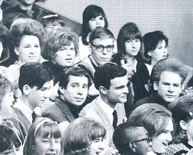 Simon and Garfunkel wrote "A Simple Desultory Philippic" as a sort of slap at Bob Dylan, or the cult of Dylan at any rate, and I suppose that TotDfL is a "simple desultory philippic" of sorts as well. Desultory means random, disconnected, jumping from one thing to another (which is something we do day to day, if not line by line) and philippic is a bitter verbal attack (although surely we're more nitpicky than bitter and more on a bit of a crusade than an all-out attack). Like a couple of incipient folksingers in a sea of Cleveland seniors, the following names jump out at us like a bunch of off-key notes: Pillip* (12 times—interesting aside: actress Rhea Perlman has written six books for kids about "Otto Pillip" and his palindromic ways), Philiip* and Phllip* (11 times), Philliip* (twice), and Phiilip* (once). A quick glance at the keyboard suggests these may occur because the L and I are sitting so close together, and not that far from the P and H. (Early snapshot of Paul and Art sitting in with Don Webster in the Upbeat audience, from the Cleveland Seniors website.)