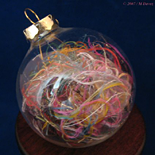 "Ornament, Ornament, wherefore ort thou, Ornament?" the Bard of Avon might have asked in a slightly garbled but self-satirizing moment. To which one could only retort: "Why not?" I love words for things you never even suspected there was a word for. An ort, so it seems, is "the snippet of thread left over in the needle after finishing a section of embroidery" (from an obsolete Dutch word meaning "a scrap or fragment of food left from a meal") and a former librarian has found a rather festive way to recycle hers. She's resorted to stuffing them inside a Christmas tree ornament. I know it's only May, it may not be orthodox, and it's certainly not orthogonal—but if you start now, you'll have something different to display in December. Reort* is reported to be found 17 times (plus one "sic") in OhioLINK, making it a typo of "high probability" on the Ballard list. (Picture of an "Ort Port" from CameoRoze.com.)