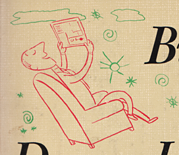 Hammering away at the building theme for one more day, Eric Hodgins' 1946 fictional memoir Mr. Blandings Builds His Dream House is one of the flat-out funniest books I've ever read. And it isn't a bad film either, cast with the dream-team threesome Cary Grant, Myrna Loy, and Melvyn Douglas. Jonathan Yardley hits the nail on the head in this description from the Washington Post: "City rubes taken to the cleaners by country slickers." Hous + House turns up 69 records in OhioLINK, and Hous + Congress 57. Which, in thousands of dollars, is about what Messrs. Hodgins and Blandings eventually ended up spending on that "dream house" in Connecticut. Note that nearly half of those spellings look antiquated (like the house Mr. B. originally wanted to buy, not build). One or two hits apiece for Housig, Housiing, and Huose as well. (Cover art for Mr. Blandings by William Steig.)